Laughing has never been easier. 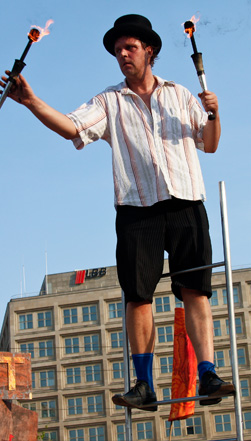 With a Mediterranean breeze blowing in the atmosphere, Willy Wonder perform his phantasies and invite to witness all the accidents that occur along the journey on which he takes us.

His vivacious personality creates an atypical Slapstick Character that could be easily out of a Fellini movie.

His conviction of his Mastroiani like magnetism on the universe and the roguish charm spread to his audience, makes of him an acclaimed performer that conquers the heart of the crowd in every performance.
The Show contains playful improvisational silent comedy, juggling skills and audience interaction.

When he finally end his show juggling and balancing on top of a 2 meters high ladder, the sky has no limits.
After 15 years of street performances, and about over 3000 performed shows, Willy Wonder has a wonderfull control of comical situations, audience awareness and eccentric interaction.

He is one of that kind of artist that easily gathers 500 people on a square, on a weekend, but audiences till 1000 people when booked for a Festival (or 2 when locked up on a phone booth).
The show is suitable for a general public of all ages.